The Eksteenskuil Farmers’ Association (EFA) was established in 1994 to contrib-ute to the social and economic upliftment of the historically disadvantaged small-scale irrigation farmers of the Lower Orange River Valley in the Keimoes area.

Following a comprehensive consultative process, in December 2006 the Eksteenskuil Agricultural Co-operative (EAC) was registered. In the course of 2007 the affairs of the EFA was gradually being transferred to the Co – operative. At the EFA AGM held on the 24th of July 2007 it was decided to dissolved the organisation on 30 September 2007, and to hand over the assets of the organization to the EAC.

Fairtrade support the EFA since 1995 and export their first products to Traidcraft to the UK. This marketing via Fairtrade has provided members with better prices as they received a special premium on their products. The EFA has applied the Fairtrade premi-ums to provide training and to develop the production and management capacity of its members and their organizations, to acquire, maintain and manage a pool of agricultur-al equipment and to maintain irrigation infrastructure for its members. These contributions have made a significant material difference to the livelihoods of the producers. 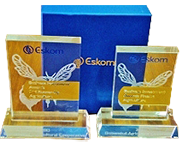